Battle of Devil's Backbone, Part One 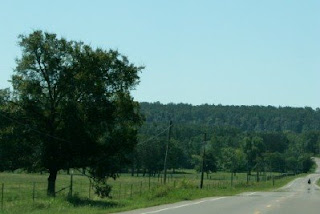 The Devil's Backbone is a unique mountain ridge that stretches across the horizon south of the city of Fort Smith, Arkansas. Part of the Ouachita (pronounced Wah-she-tah) Mountains, it is a major feature of both Sebastian County, Arkansas and LeFlore County, Oklahoma.
At the time of the Civil War, the Backbone was more than just a beautiful mountain ridge. It served as a natural barrier to military forces operating in the area.
The Confederates were the first to put the ridge to use for military purposes. Facing a disastrous disintegration of his force as the stronger Union Army of the Frontier approached Fort Smith from the west in August of 1863, Brig. Gen. W.L. Cabell tried to decide on a strategy that might give him a chance for success against the Federals.
The night of August 31, 1863, found the two sides arrayed along the Poteau River in the Choctaw Nation (today's LeFlore County, Oklahoma) just west of Fort Smith. Although the Federals expected to fight the battle for Fort Smith along the Poteau the next morning, Cabell knew he was outnumbered by an enemy that also had superior artillery on the field. In addition, he was worried about the morale of his army. Desertion had become epidemic and he feared his men might break and run unless he put them in a strong position.
Consequently, Cabell developed a plan to pull his force back from the Poteau in the night, move his supply train across the Backbone to Waldron, Arkansas, and then position his force in a strong position along the ridge. He would then use some of his cavalry to fight a delaying action with the oncoming Union force and hopefully draw it into an ambush at the base of the mountain.
It was a risky strategy that would result in the evacuation of Fort Smith by the Confederates, but short of a complete retreat, it was the only reasonable option available to the Southern general.
Our series on the Battle of Devil's Backbone will continue.