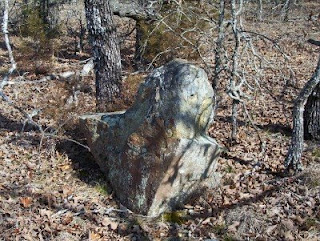 The artillery exchange between the Confederates on top of Devil's Backbone and the Federals in the valley below was more noise than anything else, although this rock on the mountain side still displayed an impact mark from a shell more than 140 years later.
As the bombardment slowed and the Union troops began to run low on ammunition, it initially appeared that Cabell's Southern troops might hold. The best efforts of Cloud's Federals had been unable to dislodge the Confederates from the mountaintop.
Suddenly, however, large sections of the Confederate force broke and ran. The act stunned the commanders of both sides. Cabell wrote:
There was nothing to make these regiments run, except the sound of the cannon. Had they fought as troops fighting for liberty should, I would have captured the whole of the enemy’s command, and gone back to Fort Smith, and driven the remainder of the enemy’s force off and retaken the place.
While the general might have been thinking a bit optimistically about retaking Fort Smith with the force at his command, he was correct in his assessment of why his men broke and ran. He had sustained total casualties of only 5 killed and 12 wounded out of a total force of around 1,200 men.
Colonel Cloud was equally surprised by the sudden departure of the Confederate defenders:
...The enemy suddenly withdrew, leaving his dead and wounded, together with arms, baggage, &c., in our possession. I immediately occupied the field, and extended my pickets beyond, taking prisoners and receiving deserters, who came flocking in.
More than 100 deserters, including officers, joined the Union forces over the next several days. At the Battle of Dardanelle, Arkansas, just eight days later, Cloud reported that the former Confederates fought side by side with his men in an attack on their former comrades:
In the attack upon Dardanelle I was assisted by three officers and about 100 men, who had fought me at Backbone, under Cabell, and it was a novel sight to see men with the regular gray uniform and Confederate State belt-plate fighting side by side with the blue of the army, and this novelty was intensified by knowing that they were fighting their old command.
With no option left to him, Cabell withdrew his remaining forces from the battlefield and retreated to Waldron.
Our series will continue. Until the next post, you can read more by visiting www.exploresouthernhistory.com/ArkansasCW5.
Posted by Dale Cox at 11:17 AM