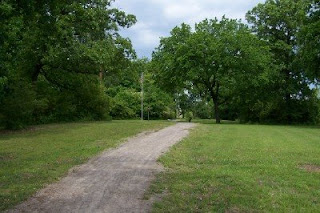 This is part four of a continuing series on the Battle of Massard Prairie, Arkansas. To read the previous posts first, please scroll down the page or consult the Archives section.
The Confederates swept down from the nearby ridge at first light, forming into two attack columns and storming across the open prairie for the Union camp at Picnic Grove. They scattered a picket post on the Jenny Lind road and the sounds of gunfire alerted the officers of the 6th Kansas Cavalry that they were coming.
An eyewitness visiting one of the scattered families that lived along the southern edge of the prairie remembered that the Confederates rounded up deserters that had showed up that morning from their hiding places in the mountains looking for breakfast. At least one man was dragged from his house and executed.
Company B from the 6th Kansas Cavalry formed in line and moved forward to meet Gano's column as it thundered across the prairie. The soldiers hoped to protect the herd of horses until it could be driven in and protected, but the Confederates quickly cut off and captured the horses.
Fighting developed between the men of Gano's column and the men of of Company B. This alerted the rest of the camp that the battle was underway and the remaining three companies from the 6th Kansas formed in a ragged line of battle through the center of the camp (the site is seen in the photograph above). Meanwhile, Gano detached a portion of his column to form a third attacking force. This detachment struck the grove and advanced on the center of the Union camp while Folsom's column hit the Federal left flank. The fighting soon became general up and down the line.
The Battle of Massard Prairie was underway.
Our series will continue in the next post. Until then, read more by visiting www.exploresouthernhistory.com/massardprairie. Please also consider my new book - The Battle of Massard Prairie - now available by following the same link. All proceeds benefit historic preservation efforts in Arkansas, including the new Cane Hill Battlefield Driving Tour Project.
Posted by Dale Cox at 2:36 PM

What a wonderful blog -- nice job covering CW sites in the Natural State. I'll be referencing some of your posts the next time I get a chance to visit. Keep up the good work

Thank you for the kind words! I fell in love with Arkansas when I moved here a little over four years ago and am just trying to share a little of its unique history with the rest of the world.

I also post a blog on Florida in the Civil War at http://civilwarflorida.blogspot.com.

My folks retired from Iowa to Greers Ferry Lake when I went off to college (30 years ago), and so I hung out there for a couple summers, and have visited many times over the years. But I have never lived there. I spent a week at GF last summer (two of my brothers still live there), and was able to get the Civil War Forum to hold their conference at Pea Ridge a few years ago.

It's a beautiful place, and largely unspoiled. And as you say, it has a unique history -- so much to explore.

As for Florida, that's one of the few states I have never set foot in.