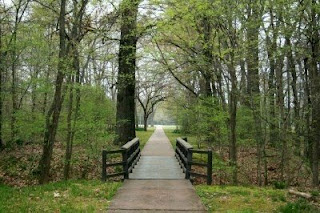 Today we begin a series of posts on Arkansas Post National Memorial in Gillett and its role in the Civil War. One of the largest battles fought on Arkansas soil took place here, involving nearly 40,000 men.
This photograph was taken looking down what was once Main Street of the town of Arkansas Post. Although the community had significantly declined by the time of the Civil War, there was still a cluster of buildings at the old town site and the street seen here was lined with structures.
More importantly to the Confederacy, Arkansas Post occupied a strategic point on the lower Arkansas River. A unique "S" shaped bend of the river made the bluffs ideal for the construction of defenses to prevent Union vessels from steaming up the Arkansas.
As a result, the Confederates constructed Fort Hindman, a powerful earthwork fortification, at Arkansas Post. The fort was a compact and strongly built earthwork with bastions on the four corners. In addition, the Confederates constructed rifle pits across the neck of the peninsula on which Arkansas Post was located. These stretched from Fort Hindman on the Arkansas across to the bank of Post Bayou.
Confederate forces in 1862 used Arkansas Post as a base for successful attacks on Union shipping on the nearby Mississippi River. They were able to capture a considerable quantity of needed military supplies, but in the process attracted the attention of the powerful Union army then operating along the Mississippi.
As our series continues, we will begin a look at the 1863 campaign against Arkansas Post. Until then, you can read more by visiting www.exploresouthernhistory.com/arkansaspost.
Posted by Dale Cox at 9:24 AM