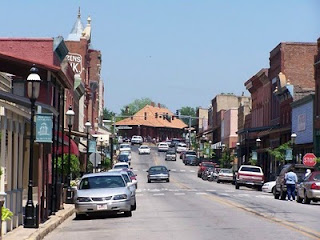 The sharp fight at Dripping Springs on the morning of December 28, 1862, opened the door to the port of Van Buren on the Arkansas River for the Union Army of the Frontier.

Pursuing Crump's retreating cavalrymen, the Union cavalry pushed south into the River Valley. There was some skirmishing as the pursuit neared Van Buren, but Crump and his men turned in force only once, on Logtown Hill on the northern edge of the town. The area is now part of the growing city. The Confederates were again driven back and the Federals advanced to the crest of Logtown Hill, which gave them a spectacular view of Van Buren and the Arkansas River below.

Below they could see the retreating Confederates as well as several steamboats either already moving or preparing to make way on the river. The Union horsemen stormed down the long slope of the hill on the heels of Crump's men, charging right down the main street of Van Buren. The sudden appearance of the blue uniformed troops in their midst stunned the people of Van Buren, who watched them go by from the sides of the street.

Crump and his men made the ferry across the river and it was able to make way before the Union troops could open fire. Most of the Confederates escaped across the river, but others - particularly a large number of sick and some wounded from the Prairie Grove Campaign - were taken prisoner. General Blunt and part of his force pursued steamboats that were trying to escape down river, firing on them from the riverbank and finally forcing one to surrender while another ran aground.

The rather odd and disjointed Battle of Van Buren intensified later in the day when a Confederate battery opened fire on the Federals from across the river, raining shells on the town and reportedly killing several civilians. Union casualties were light, as Confederate casualties had been. The Confederate guns were finally forced to withdraw when Federal artillerymen placed guns on the heights along the northern edge of Fairview Cemetery and returned fire. The superior weight and number of the Union cannon drove off the Confederate battery.

General Blunt crossed over the Arkansas River with a small detachment the next morning, become the first Union force to set foot south of the river during the war. But most of the Confederates from around Fort Smith were already gone. General Thomas Hindman had been in the process of withdrawing his army to Little Rock when the raid to the river took place.