147th Anniversary of the Battle of Prairie Grove 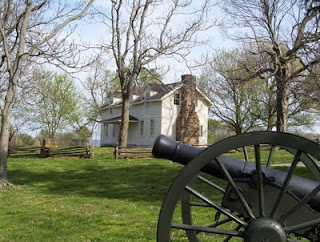 It was 147 years ago today that one of the bloodiest battles in U.S. history was fought at Prairie Grove, Arkansas.
Pushing up Cove Creek valley, the Confederate Major General Thomas C. Hindman emerged from the Boston Mountains with an army of 9,000 infantry, 2,000 cavalry and 22 pieces of artillery. Hindman knew the two wings of the Union Army of the Frontier were divided and he hoped he could attack with a superior force and destroy one and then the other in detail. If not for a herculean march by the wing of the army under Brigadier General Francis J. Herron, the Confederates might well have succeeded.
The Confederates came out of the mountains and struck the road connecting the Northwest Arkansas towns of Fayetteville and Cane Hill only to find that, recognizing the nature of the crisis at hand, General Herron had rushed his men south in an effort to link up with the other wing of the army under Brigadier General James G. Blunt. Although Herron did not reach Blunt in time for the start of the battle, he was close enough that Hindman quickly found himself between two converging Federal forces.
After some initial fighting with Herron's forces, Hindman recognized the situation for what it was and took up a strong position along a commanding ridge at the site of today's town of Prairie Grove. The Confederate battle lines stretched for miles and ultimately came under attack from the full force of the Union army.
For most of December 7, 1862, the two armies fought it out along the Prairie Grove ridge. By the time darkness fell, they had battled to a bloody tactical stalemate. Neither army could drive the other off, but Hindman did not have the ammunition and supplies he needed to fight another day against the combined Federal forces and withdrew back into the mountains under cover of darkness.
To learn more, please visit www.exploresouthernhistory.com/ArkansasPG1. I also recommend William Shea's new book on the Prairie Grove campaign, Fields of Blood, which is also available by following the link.
Posted by Dale Cox at 6:48 PM