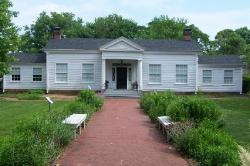 Although the area was settled even earlier, the city known today as Fayetteville was founded in 1828 and incorporated in 1836. By the time of the Civil War it was an important community and then, as now, was one of the largest towns in the state. This made it an important objective for both the Union and Confederate armies.
Fayetteville was surrounded by fighting during the Civil War, with two of the largest battles of the war being fought within 30 miles of the city. The Battle of Pea Ridge, fought on March 7-8, 1862, was a devastating Union victory that sent Earl Van Dorn's shattered Confederate army reeling back into the mountains. The Confederates tried again in December, this time led by General Thomas Hindman.
Hindman fared better than Van Dorn, fighting the Union Army of the Frontier to a bloody stalemate at the Battle of Prairie Grove on December 7, 1862. The engagement was a strategic Union victory, however, as Hindman realized he could not defeat the opposing forces and had no choice but to withdraw back into the Boston Mountains.
There was more fighting, this time in Fayetteville, on April 18, 1863, when Southern forces attacked the city itself. They were once again driven back after surging as far as the downtown area.
The new Fayetteville section at ExploreSouthernHistory.com provides links and other information on all of these events, plus much more. To check it out, please visit www.exploresouthernhistory.com/fayetteville.
Posted by Dale Cox at 1:35 PM