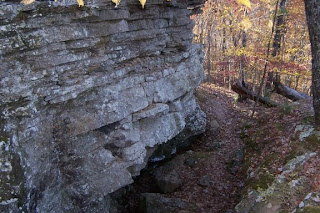 The Union Army of the Frontier moved out from its camps at Prairie Grove and Cane Hill (now spelled Canehill) on the morning of December 27, 1862, 147 years ago today.
Well aware of the risks of trying to converge their entire force onto a single road and then move the resulting logjam over the Boston Mountains, which rise abruptly just south of Prairie Grove, Generals Blunt and Herron decided to cross the mountains by two separate routes.
Herron moved to the left via the Wire or Telegraph Road, which followed the old Butterfield Stage Line route over the mountains by staying primarily on the crests of the ridges. Much of this old road remains in use today and a portion can be hiked at Devil's Den State Park (shown above).
Blunt, meanwhile, move south via the Cove Creek Road, which follows the creek of that name south through the mountains. The original road crossed the winding creek nearly 40 times and as the soldiers marched on December 27th, they were forced to wade through the icy water over and over.
It had snowed the week before and there was still snow and ice in the mountains. Although the troops were in good spirits, the march was miserable. A member of Blunt's division wrote that water was high and the little streams that fed the creek and the creek itself were deep and fast. The icy water at the fords was often waist or chest deep. The soldiers were marching so fast and wading so much water that they did not have time to dry out and marched in sodden boots and wet clothes. It was also reported that it took as many as 12 horses to pull each of the army's 12 cannon over the mountains, sometimes with the assistance of as many as 50 men pulling on ropes.
By midnight on December 27th, the two wings of the army were approaching their planned bivouac at Oliver's Store, then a well-known landmark in northern Crawford County. Thus far the Confederate forces to the south had not detected the danger that was rapidly approaching via the mountains.
I'll continue to retrace the daily events of the raid tomorrow. Until then, you can read more at www.exploresouthernhistory.com/vanburenbattle1. You can learn more about Devil's Den State Park at www.exploresouthernhistory.com/ardevils1.
Posted by Dale Cox at 12:20 PM