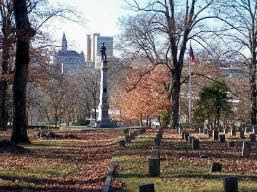 Located on a mountain slope overlooking downtown Fayetteville, Confederate Cemetery is a moving place to look back and remember the sacrifices of 1861-1865.
The historic cemetery contains the remains of hundreds of Southern soldiers who paid the ultimate price in the camps and battlefields of Northwest Arkansas. Many fell at the Battles of Pea Ridge and Prairie Grove. Others died in the miserable winters of 1861 and 1862 when Confederate troops suffered in disease-ridden camps throughout the region.
The soldiers were originally buried in locations across Northwest Arkansas, but their remains were exhumed and brought to the cemetery when it was established by the Southern Memorial Association of Washington County during the 1870s. Today they rest in a peaceful burial ground surrounded by a wall of native stone.
The cemetery also is the location of a beautiful Confederate monument that is now more than 100 years old.
To learn more, please visit www.exploresouthernhistory.com/fayettevillecc.
Posted by Dale Cox at 7:25 PM