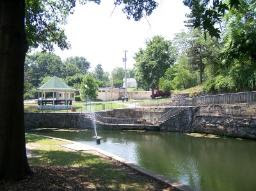 Although the modern city of Siloam Springs was not incorporated until 1881, the settlement of Hico existed on the site of the Northwest Arkansas community during the Civil War.

A Prussian immigrant named Simon Sager had arrived in the area by around 1839 and established a plantation adjacent to the little community, established a few years earlier as a trading post for the Cherokee Nation. The Cherokee had arrived in what is now eastern Oklahoma after their long journey west on the Trail of Tears. They were desperately in need of basic necessities and the trading post at Hico, along with other similar establishments along the border, supplied at least some of these needs.

In addition to his skills as a farmer, Simon Sager was an accomplished carpenter and furniture maker. He helped build the Cherokee Male and Female Acadamies in Tahlequah, Oklahoma, and supplied his neighbors with beautiful pieces of furniture, some of which survive to this day. He also raised beef and was by all accounts a successful entrepreneur along what was then the western frontier.

The outbreak of the Civil War in 1861, however, changed everything for both Sager and the little community that would eventually become Siloam Springs. The area was heavily raided by Blunt's Division of the Union Army of the Frontier during the summer and fall of 1862. The Federals defeated Confederate troops at the Battle of Old Fort Wayne - less than 20 miles to the northwest - on October 22, 1862 and more fighting followed before the end of the year at the Battle of Cane Hill and the Battle of Prairie Grove.

To supply his thousands of men with food and other necessities, Union General James G. Blunt ordered out foraging parties that ravaged the countryside around what is now Siloam Springs. Farms, including that of Sager, were stripped of forage, grain, beef, pork, poultry and anything else the soldiers wanted. Families were often left to face starvation or flee and pro-secession families watched their homes go up in flames.

After the Prairie Grove Campaign, the armies soon moved on, but the area along today's Arkansas-Oklahoma border was then overrun by guerrilla bands. Some of these were allied with the Union, some with the Confederacy and some with no one at all. They swarmed over the countryside, raiding farms, mills and homes. Murder, robbery and assault were the watchwords of the day.

On May 17, 1864, Simon Sager's home was surrounded by a pro-Union guerrilla party of Cherokee "Pin" Indians. When the attack ended, Sager was dead. The creek flowing through the heart of Siloam Springs, however, still bears his name and one of his cabins is preserved on the campus of John Brown University.

To see additional photos and learn more about Siloam Springs, please visit www.exploresouthernhistory.com/siloamsprings. For a good account of the 1862 fighting in Northwest Arkansas, be sure to check out William L. Shea's new book, Fields of Blood: The Prairie Grove Campaign.
Posted by Dale Cox at 1:29 PM