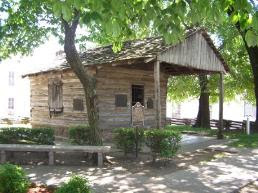 A little log one-room schoolhouse now preserved on the grounds of the Crawford County Courthouse in Van Buren holds a unique place in American history. Albert Pike once taught there.

A major figure in Arkansas in the years before the War Between the States, Pike was opposed to the secession of the Southern states, but served the Confederacy as a brigadier general. By the time he received his appointment in November of 1861, however,

he was already a noted explorer, lawyer, poet, writer, educator and soldier. 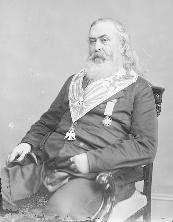 A native of Massachusetts, Albert Pike had arrived west of the Mississippi in 1831, spending time in St. Louis and Independence, Missouri, before joining several major hunting and trading expeditions into Texas and New Mexico. In 1833 he accepted a job teaching at the log school that can be seen today in Van Buren.

It is thought that the structure was built in around 1820, making it one of the oldest sta

nding buildings in Arkansas. Pike did not teach long before moving on to Little Rock where he engaged on a career in law, journalism and politics. He became a nationally known writer and poet in the Antebellum era.

His career as a Confederate general was brief. Assigned to command in the Indian Nations in what is now Oklahoma

, he led Native American troops at the Battle of Pea Ridge. He became involved in a conflict with General Thomas Hindman, however, and resigned his commission the following year.

Pike sat out the rest of the war, living part of the time in the Ouachita Mountains. In later years he continued his work in Freemasonry, which he had begun in the 1840s. He eventually became a 33rd degree Mason and is regarded as the father of modern Freemasonry.