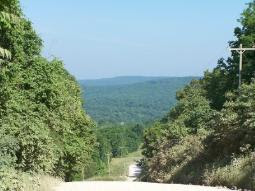 On December 6, 1862 - the day before the Battle of Prairie Grove - Union and Confederate troops battled for control of Reed's Mountain, a ridge separating the Cove Creek Road from today's community of Canehill (then spelled Cane Hill).

The mountain was critical to Confederate General Thomas Hindman's plans to advance up from Van Buren into Northwest Arkansas before the divided Union Army of the Frontier could reassemble. If all went well, he hoped to move up the Cove Creek Road and destroy one Union division with overwhelming force before then turning on the other with the same advantage.

To achieve this objective, however, it was critical that Hindman's movement up Cove Creek be screened from Union General James G. Blunt's division at Cane Hill. Since Blunt had pickets on the road and a small force overlooking the Cove Creek Valley from the crest of Reed's Mountain, Hindman ordered Colonel J.C. Monroe to take his brigade of Arkansas cavalry ahead of the main army and drive off the Federals.

Driving Blunt's pickets up the road, Monroe struck Reed's Mountain with a force of only 400 men (150 of his soldiers were doing picket duty up and down the road). Charging up the slope of the mountain, he was initially driven back by the Union soldiers at the top. Spreading into a full line of battle, however, he engaged the Federals in a severe firefight and then, finally, was able to move around one of their flanks and drive them from the mountain as night fell on December 6, 1862.

The small victory by Monroe's Arkansans created the opportunity Hindman wanted to push his army past Blunt's position at Cane Hill before his movement was detected by the Union commander.

To learn more about the remarkable fight at Reed's Mountain, please visit www.exploresouthernhistory.com/ARReedsMountain.