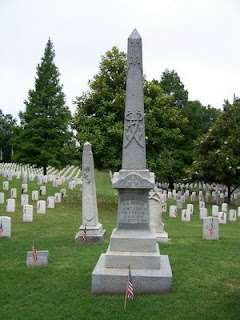 This is the grave of Brigadier General Richard Caswell Gatlin (C.S.A.) at Fort Smith National Cemetery.

A native of North Carolina, Gatlin graduated from the U.S. Military Academy at West Point in 1832 and became a Brevet Second Lieutenant in the 7th Infantry Regiment that same year.
After serving in a subsidiary role during the Black Hawk Expedition, he was sent to the Western frontier where he was posted first at Fort Gibson and then later at Camp Canadian, Camp Desire (near Fort Towson) and Camp Nacadoches (Texas).
He served in the Second Seminole War in Florida from 1839-1842 and as adjutant of the 7th Infantry.

Like many later Civil War generals, he fought in the Mexican War and was wounded at the Battle of Monterey (September 21-23, 1846). His actions there resulted in promotion to Brevet Major for gallant and meritorious conduct.

The next fourteen years found him serving in posts ranging from Florida to the Dakotas. In 1858-1860 he served in Albert Sidney Johnston's Utah Campaign and at the outbreak of the Civil War was at Fort Craig, New Mexico, were he served as major of the 5th Infantry.
He was in Fort Smith on a visit (his wife was from Arkansas) when state militia forces captured the fort on April 23, 1861. Taken as a prisoner of war, he was released on parole but on May 20, 1861, resigned his commission in the U.S. Army and offered his services to the Confederacy.
He initially served as adjutant general and major general of the North Carolina militia, but in August of 1861 was promoted to brigadier general in the regular Confederate army and assigned to the defense of North Carolina. The job did not go well. Fort Hatteras and New Bern fell and Gatlin blamed the losses on his failure to receive reinforcements and his inability to prepare for the attacks. He was relieved from command due to illness in March of 1862 and resigned from the Confederate Army in September of that year. He later served as adjutant and inspector general for North Carolina.
Gatlin returned to Arkansas after the war and made his living as a farmer. He died at Mount Nebo in 1896 and is buried with his wife at Fort Smith National Cemetery.
To learn more about Fort Smith National Cemetery, please visit http://www.exploresouthernhistory.com/arfsnc1.html.
Posted by Dale Cox at 1:21 PM