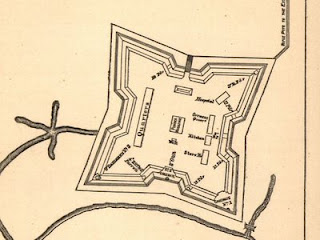 With the defense of the Arkansas River Valley in mind, the Confederates selected a bluff just downstream from the old Arkansas Post town site for the construction of a significant fortification.

Named Fort Hindman, the bastioned work was extremely powerful and commanded significant stretches of the river. The diagram of the fort shown here is from the collection of the National Park Service.
The work was casemated in two positions for the protection of the gunners and mounted 8" and 9" guns, as well as an array of smaller pieces to defend the earthworks against infantry attack.

The site of the fort has been washed away since the Civil War and is now covered by the water of Post Bend. The original location can be viewed from an overlook at the National Memorial where interpretive panels point out the site of the fort and provide details on the Union attack and design of the fort itself.
Time and the elements have been harsh on the remains of the Confederate defenses at Arkansas Post. Not only has Fort Hindman been completely destroyed, but the line of rifle pits and entrenchments that ran west from the fort across the neck of land to Post Bayou have been so weathered as to be barely visible to visitors today. This line was constructed by Southern troops to prevent attacking Federals from flanking the main fort and sweeping into the camps of the 5,000 or so men (mostly dismounted cavalry) posted to defend Arkansas Post. Additional rifle pits and light field works were located downstream from the fort.
Behind these lines of works, the Confederates occupied what remained of the old town of Arkansas Post. Buildings there were converted for use as quarters, storage facilities and hospitals. In all it was a strong post and would require a significant Union force to capture.
Our series will continue with a look at how the Union campaign to capture Arkansas Post came about and some of the controversy that surrounded it. Until the next post, you can learn more by visiting www.exploresouthernhistory.com/arkansaspost.