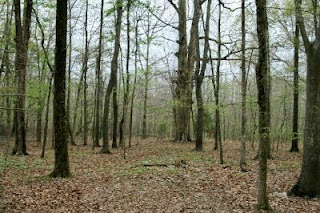 The morning of January 11, 1863, found the Confederate forces concentrated in a line stretching across the peninsula from Fort Hindman to Post Bayou.
Time has softened the traces of war at Arkansas Post National Memorial. The Southern rifle pits, seen here, are barely visible today, even on the ground at the site. This photograph was taken standing directly on top of them and they run away from the camera through the middle of this photo, but have been so weathered by more than 100 years of rain and wind that they are all but gone.
After getting his force organized, McClernand moved up against the Confederate infantry line and a sharp battle erupted. At the same time, Admiral Porter resumed his attack against Fort Hindman with help from Federal land artillery landed on the opposite bank of the river.
After three hours of tremendous bombardment, the Federals finally achieved their goal of silencing the guns of the fort. McClernand then prepared for his final assault on the Southern breastworks. The two forces had been heavily engaged on the left flank of the Confederate line and the fighting had spread to points all along the breastworks, with the Texas troops in particular fiercely resisting and inflicting heavy casualties on the attacking Union soldiers.
As McClernand prepared to launch a final assault, however, white flags began to appear in spots along the Confederate line. The surrender remains controversial to this day. General Churchill denied that he had authorized it and many of the Texans were outraged, wanting to fight on. The Union troops had occupied sections of the line, however, and there was nothing Churchill or his men could do to alter the outcome. The Battle of Arkansas Post was over.
Our series will continue. To learn more about Arkansas Post National Memorial before the next post, please visit www.exploresouthernhistory.com/arkansaspost.
Posted by Dale Cox at 7:49 PM