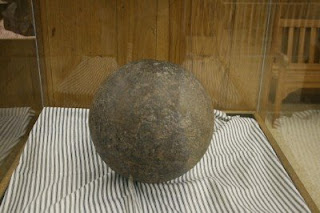 Although far too few people make the fascinating journey to Arkansas Post National Memorial in Gillett, many of those that do often overlook the nearby Arkansas Post State Museum.
Doing so is a mistake.
The state museum, located just two miles from the national park on U.S. Highway 165, is a fascinating stop in its own right, especially for those with an interest in Civil War history.
Items on display at the state museum include artifacts (like the cannonball seen here) from the Battle of Arkansas Post. The engagement took place on January 10-11, 1863, when Union forces attacked Arkansas Post in a preliminary episode to the Vicksburg Campaign. The primary defensive work, Fort Hindman, was taken after a brutal bombardment by Union warships and a land attack against adjacent Confederate rifle pits.
The surviving parts of the battlefield are now part of Arkansas Post National Memorial, which also memorializes early French and Spanish settlements, the lost town of Arkansas Post and the last battle of the American Revolution.
The nearby Arkansas Post State Museum houses artifacts from the site and also displays a number of early structures from the Delta region of the state. Included among these are a pioneer kitchen, a 19th century dogtrot log house, an authentic gallows and an unusual 1930s-era children's playhouse.
To learn more about Arkansas Post State Museum, please visit our Arkansas Post pages at www.exploresouthernhistory.com/arkansaspost5. You will also find links there to our pages on the national memorial and battlefield.
Posted by Dale Cox at 7:55 PM