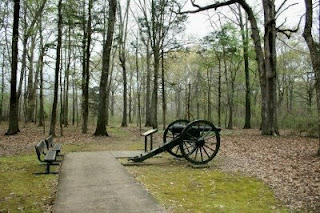 The massive Union fleet began its move on Arkansas Post during the first week of January, 1863.
Although the Federal vessels went up the White River cutoff into the Arkansas River to try to escape detection by the Confederates, General Churchill at Fort Hindman was aware of their movement almost immediately. Word of the approaching force filtered down through the ranks and the Confederates began to prepare for action.
The total force available to General Churchill by January 9, 1863, included roughly 5,500 men, not all of them fit for duty. A number of sick were housed in the old Arkansas State Bank building at the Arkansas Post town site. The structure had been converted for hospital use.
The troops were divided into three brigades, under Colonels Robert G. Garland, James Deschler and John W. Dunnington. The Confederate force consisted of the following units:

Although the vast majority of the force was cavalry, they would fight dismounted as light infantry during the Battle of Arkansas Post. Fort Hindman itself was armed with three pieces of heavy artillery (8 and 9-inch guns) and several smaller pieces. Five field guns were also available to help the Southern forces try to hold their entrenchments against infantry attack.

The Union vessels approached Arkansas Post on the January 9th, 146 years ago today. As the transports began to disembark the more than 30,000 Union land troops, Churchill pushed his defenders forward to an advance line of trenches downstream from the main defenses. Sherman's Corps overran these late on the 9th and the Confederate general pulled his men back from their exposed position into his primary works.
In the next post we will look at the opening of the main battle, which took place on January 10, 1863. Until then, you can learn more about Arkansas Post National Memorial by visiting www.exploresouthernhistory.com/arkansaspost.