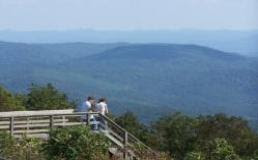 The western Ouachita Mountains presented a major natural barrier to the southward advancement of Union troops along the Arkansas and Oklahoma (then the Indian Territories) border during the War Between the States.
The mountain range runs roughly east to west from near Little Rock into eastern Oklahoma. A series of commanding ridges and mountains, some of which are the highest points between the Appalachians and the Rockies, the Ouachitas served as a natural defense for Confederate forces during the war and also provided protection for Southern families and even guerrilla gangs that moved in and out of the mountains with impunity.

Now a major scenic area for visitors to the region, the mountains can be explored and accessed by way of the Talimena Scenic Drive, a national scenic byway that stretches 54 miles from Mena, Arkansas, across the border to Talihina, Oklahoma. As it winds its way along the very tops of the mountains, the drive passes not only some of the most beautiful scenery in the South, but an array of unique historic sites as well, many of them with Civil War ties.

Some of these include Queen Wilhelmina State Park and Rich Mountain Cemetery in Arkansas. The state park features numerous historic sites, including a mountain spring used by pioneer families at the time of the war. The first grave in the cemetery is said to have been that of a young girl who froze to death on a brutal winter's night during the war years. Her ghost supposedly still haunts the rugged terrain.

Along the Oklahoma stretch of the scenic byway are historic sites such as Horse Thief Spring and the Old Military or Fort Towson Road. The spring is was a water souce for Old West outlaws including that prowled the borderlands during the years after the Civil War. The Old Military Road, now marked by a park area with interpretive signs, was a major route through the mountains for Confederate forces and civilians.

The high elevations also provide welcome relief from the height of summer with cool breezes sweeping up the mountainsides to the overlooks and park areas along the Talimena Scenic Drive.

To learn more about this remarkable roadway, please visit www.exploresouthernhistory.com/ARTalimena1.
Posted by Dale Cox at 8:44 PM