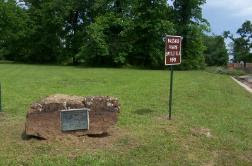 Note: Next Tuesday will mark the 146th anniversary of the Battle of Massard Prairie at Fort Smith, Arkansas. Over the next few days, I will be posting a series of accounts of the battle that appeared in newspapers, both North and South, in the days and weeks following the engagement. If you are interested in reading more, my book on the battle can be ordered on this page. You can also visit my webpages on Massard Prairie at www.exploresouthernhistory.com/ArkansasCW4.

REBEL ATTACK ON OUR OUTPOSTS

Last Wednesday, July 27th, about sunrise a strong force of rebels under Geneal Gano, consisting of the 30th, and part of the 31st regiments Texas Cavalry, Col. Well's battalion, and Folsom's and Walker's regiments of Choctaws of Cooper's brigade, in all, about two thousand men, made an attack upon a battalion of the 6th Kansas cavalry, numbering about 200 men and commanded by Maj. Mefford of that regiment on Mazard prairie, about seven miles from town.

Our men fought most heroically against overwhelming odds, retreating slowly towards town and contending every inch of ground. They were however, at last completely surrounded and overpowered and a number taken prisoners, among whom were Maj. Mefford and Lt. De Friese. Ten of our men were killed, 15 wounded; the rest fought their way through.

The rebels lost 12 killed and 20 wounded.

As soon as the news of the attack reached Headquarters, Col. Judson, 6th Kans. Cav., hastened to the scene of the action with a mounted force, but found that the enemy had left an hour and a half before his arrival. He pursued him five miles across the mountain, ascertaining that he had nothing except the prisoners and what could be carried away on horses. The Colonel then halted and sent five scouts forward until they came up with the enemy's rear, which they reached about 3 o'clock p.m., near the crossing of the Poteau, about ten miles from the camp. The colonel then returned to the camp and found that the enemy had burned about three fourths of the camp and had left in a great hurry, leaving large quantities of Quartermaster's stores and transportation unharmed.
Posted by Dale Cox at 5:46 PM