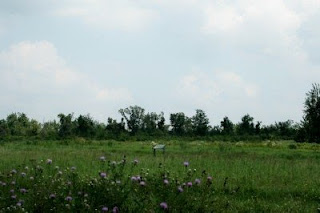 As the Confederates were driven back from the ground along Elk Creek, General Cooper made one last effort to stop the oncoming Federals.
Forming the 1st Choctaw and Chickasaw Regiment on this ridge near the southern end of the battlefield, Cooper attacked the Union forces as they approached down the Texas Road:
The Choctaw, under Colonel Walker, opportunely arrived at this time, and under my personal direction charged the enemy, who had now planted a battery upon the tibered ridge about 1,000 yards north of Honey Springs. With their usual intrepidity, the Choctaws went at them, giving the war-whoop, and succeeded in checking the advance of the enemy until their force could be concentrated and all brought up.
The charge by the Choctaw and Chickasaw soldiers was particularly brave when it is noted that they were armed with some of the worst weapons used during the war. A report the following year indicated that many of their guns would barely fire and were almost useless in battle. At Honey Springs their ammunition also failed them. Dampened from weather conditions, few Confederates could even fire their guns by this time of the battle and the Choctaw and Chickasaw charged into the face of well armed Union troops with virtually no ability to return fire.
Discouraged by the state of their arms and ammunition, the Native American soldiers withdrew ahead of the now reformed Union forces and provided cover for the rear of Cooper's column as it withdrew from the battlefield.
Our series on the Battle of Honey Springs, Oklahoma, will continue.
Posted by Dale Cox at 11:23 PM