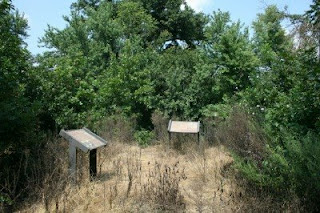 This view was taken at the Honey Springs Battlefield on the south side of Elk Creek.
The open ground in the photograph is what remains of the old causeway that led up to the Civil War bridge. The bridge itself began just beyond the signs visible here. The green trees in the background are actually on the opposite side of the creek.
This was the critical objective of the Battle of Honey Springs. As the Confederates fell back from their main position north of the creek, holding the bridge became vital if they hoped to beat back the Union assault and defend their stockpiles of supplies at Honey Springs Depot. For the Federal forces, seizing the bridge intact provided them with control of the Texas Road and access to those some supplies.
Despite an intense fight, the shattered Confederate lines could not hold the bridge. General Cooper ordered a withdrawal and Union troops stormed across the bridge and onto the causeway visible here, pushing Southern soldiers back ahead of them.
The focus of the battle now shifted to the south side of Elk Creek.
Our series on the Battle of Honey Springs, Oklahoma, will continue.
Posted by Dale Cox at 1:30 PM