Anniversary of the Battle of Prairie Grove is One Week Away 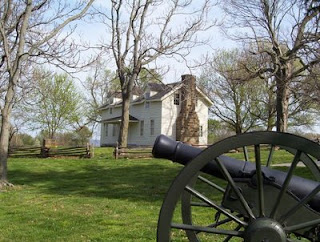 Next weekend (December 6-7) will mark both the 146th anniversary of the Battle of Prairie Grove, Arkansas, and the 100th anniversary of the establishment of the battlefield park.
The Battle of Prairie Grove was one of the bloodiest confrontations in the West and was a major battle of the Civil War. You can learn more about the history of the battle by clicking here.
Events are planned for both next Saturday (December 6) and Sunday (December 7) at Prairie Grove Battlefield State park to commemorate the battle itself as well as the establishment of the park.
A new painting of the battle will be unveiled by Andy Thomas on Saturday morning and limited edition prints will go on sale at 11 a.m. Visitors will be able to take part in guided tours through Union and Confederate camps and witness drills and other living history presentations.
Then at 1 p.m. on both Saturday and Sunday, reenactors will portray the Battle of Prairie Grove on a section of the battlefield near the historic Borden House. The actual battle stretched for miles, but the reenactments will give visitors a chance to experience some of the sound and sights of an actual Civil War battle.
Admission to the park, reenactments and Hindman Hall Military Museum are all free for the weekend, but there is a $4 parking fee to park your car. There were will be concessions on the grounds so head out to Prairie Grove next weekend to enjoy a real step back in history.
I'll have more on the Battle of Prairie Grove and planned reenactment events over coming days.
Posted by Dale Cox at 12:27 PM

Hi Dale,
I love Andy Thomas paintings. Do you have any inside info about what part of the battle is covered by his new one?

Drew,
Good to hear from you! As I understand it, this one "They Came Like Demons" is set on the west side of the battlefield where fierce fighting took place near the Morton House during the closing hours of the battle. There is also a Thomas painting of the fighting around the Borden House, so this is his second of Prairie Grove.

thanks, Dale. That makes sense, to do one for the other side of the battlefield. I like the Borden House painting; it used to be my desktop wallpaper.

Drew, I really like that one as well. I'm really anxious to read the new Prairie Grove book when it comes out next year.