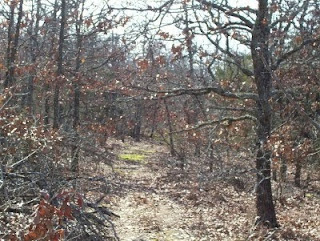 As Union troops surged into Fort Smith on the morning of September 1, 1863, General James G. Blunt ordered his cavalry to pursue the retreating soldiers lead by Confederate General W.L. Cabell.

The Confederates were falling back on the Waldron Road, having evacuated Fort Smith without a fight, and appeared to be in full flight. Following Blunt's orders, Union Colonel William F. Cloud led the 2nd Kansas and 6th Missouri Cavalries, along with two sections from Rabb's Indiana battery, down the road leading to Jenny Lind and Waldron.

The Federals skirmished with Cabell's rear guard at Jenny Lind, sending the Confederate horsemen into a rapid retreat. What Cloud didn't know as he stormed after them, however, was that it was all part of a trap planned by the Southern general. Knowing that the Union commander would think he had the Confederates on the run and was closing in on the rear of their column, Cabell prepared an ambush where the Waldron Road crossed the Devil's Backbone, an abrupt mountain ridge that runs east to west across the horizon south of Fort Smith.

As Cloud and his horsemen rode up to the foot of the ridge, intent on catching their prey, the hunter suddenly became the hunted. The Union troopers road into a deadly trap and were ambushed by the Confederates of Monroe's Regiment who were hidden at the bottom of the Backbone:

The enemy formed in a dense growth of small timber and brush, and when our scouts came up, they let them pass through without firing a gun, but when Company C came up, they opened upon them a very heavy volley of infantry in two columns. Your son (Capt. E.D. Lines, 2nd Kansas) was killed at that time. He was in the extreme advance, (as was his custom,) and was shot by a Minnie ball, through the bowels and liver.

Following the ambush, the Battle of Devil's Backbone raged for three hours. The two forces engaged in a severe artillery duel that damaged nerves far more than it did bodies. The Confederates held their own and appeared to be on the verge of prevailing when the cannon fire finally slowed. To his shock and dismay, however, General Cabell watched as his army virtually disintegrated around him.

Not under immediate attack and having fought well so far, the Confederate lines suddenly collapsed and soldiers streamed down the backside of the ridge. Cabell could do nothing but withdraw his remaining intact units and fight a rear guard action as he pulled back to Waldron. The loss of the fight at Devil's Backbone ended his hopes of defeating the Union army in detail and retaking Fort Smith.

To learn more about the battle, please visit www.exploresouthernhistory.com/devilsbackbone.
Posted by Dale Cox at 2:14 PM