New Prairie Grove Book to be Released on Saturday 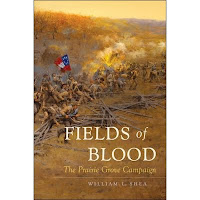 William L. Shea's long-awaited new history of the Prairie Grove campaign is expected to be released this Saturday.

Fields of Blood: The Prairie Grove Campaign is 392 pages long and is being published by the University of North Carolina. The research and writing of the book has been underway for a number of years and it sounds like this one will be as thorough and enjoyable as Shea's earlier history of the Battle of Pea Ridge.

The Battle of Prairie Grove was fought in Northwest Arkansas on December 7, 1862, and ended in a tactical draw. Union and Confederate forces battled to a bloody standstill along and in the fields below a ridge at today's town of Prairie Grove. The Confederate forces had no choice but to withdraw before the battle could resume the next day, however, and as a result the campaign was won by the Union.

The book will retail for $36 beginning Saturday, but you can still save $11.90 and buy a copy for just $23.10 if you place an advance order on Thursday or Friday. After the 23rd of October, however, purchases will cost full price.

If you would like to learn more about the Battle of Prairie Grove or place an advance order while there is still time, you can do so at www.exploresouthernhistory.com/ArkansasPG1.