Did the White River Monster sink a Gunboat? 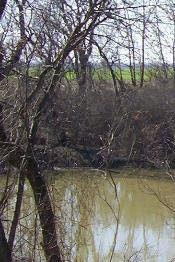 I've been doing some research recently into historical accounts of the White River Monster, the strange creature that some claim inhabits the White River in the vicinity of Newport and Jacksonport, Arkansas.
One of the notations I've seen regarding the monster is that it may have been responsible for the sinking of a gunboat on the river during the Civil War. Obviously, I have not found any mention of this in the Official Records set. But I am curious as to the origin of the claim. If you have any clue on this one, drop me a comment and let me know!
If you aren't familiar with the White River Monster, it is a fun and unique part of Arkansas history and folklore. As best I can tell, the first written report of something strange in the White River appeared in 1912 when a party of timber workers spotted what they described as a giant turtle in the river downstream from Branson, Missouri. They at first thought it was a boulder, but then realized it was a living creature. Its weight was estimated at 300 pounds! The report generated quite a buzz in Branson and a group of sportsmen set out downstream in boats with ropes and other tools in hopes of catching what was already being described as "the monster." The results of the expedition are not known.
There were other reports over the next 15 years, but then in 1937 the story exploded into the national media. A farmer reported that he and his farm workers had seen some kind of huge creature in a deep eddy about 6 miles downstream from Newport, Arkansas. The Newport Chamber of Commerce got in on the act and spread the story to newspapers far and wide. Hundreds of people flooded to the town, some from as far away as California, in hopes of catching a glimpse of the White River Monster. The chamber gave them the chance - for 25 cents a piece - and even hired a diver to come in from Memphis and search the river. He had no luck in finding the answer to the mystery.
The monster continued to pop up now and again over the years, but the next big splash of publicity was in 1971 when, once again after a time of high water, numerous people reported seeing it.
If you are interested in learning more and seeing a possible photograph of the monster, please visit www.exploresouthernhistory.com/whiteriver1.
Posted by Dale Cox at 8:07 PM

I was just looking into this strange tale and I found that it was told by country singer Jimmy Driftwood but I don't know if he came up with it himself of heard it somewhere. There was a federal gunship disabled on the white river by a confederate shore gun (the water was too shallow for the ship to actually sink). The monster was not first reported until many years after the civil war. Perhaps this is where the tale came from.

Hey, thanks for commenting on this one. It is a really strange story that, so far as I can tell, has no basis in an actual incident. I've pretty much reached the same conclusion on it that you have. Thanks for checking out the blog, by the way!