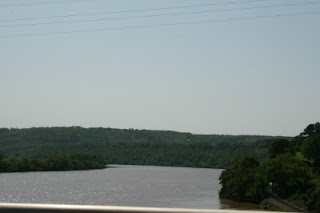 One of my favorite communities in Arkansas is the beautiful city of Ozark. Nestled on the banks of the Arkansas River, the community has a rich history that dates back for hundreds of years.

French fur trappers and hunters frequented this area during the 1600s and 1700s. In fact, it is believed that today's "Ozark" originated from the French term "Aux Arc" ("The Arc"). The term is thought by some to refer to the sweeping bend of the Arkansas River where Ozark is located. It has grown to apply not just to the vicinity, but to the entire mountainous region known today as the Ozarks.
During the Civil War, Ozark was an important base of operations for Confederate troops following the Battle of Prairie Grove. General W.L. Cabell marched from Ozark in April of 1863 on his way to the Battle of Fayetteville. Today's Pig Trail Scenic Byway follows part of the old road that led north through the mountains from Ozark to Fayetteville.
Several small engagements were fought at Ozark during the last two years of the Civil War and a monument on the grounds of the courthouse pays tribute to a Confederate officer who was killed just north of town.
The area was also frequented by guerrilla bands that hid out in the mountains just north of town. These groups, some associated with the Confederates, some associated with the Federals and some worried only about themselves, terrorized local citizens both during and after the war.
Ozark today is a beautiful community. Overlooking the river, the city's museum includes fascinating exhibits on area history. It is also a stop on the water route of the Trail of Tears. There are historic structures, a nice collection of monuments on the grounds of the courthouse, and the Arkansas River bridge at Ozark offers what has been named one of the finest views in the country. And by the way, Rivertowne BBQ in downtown Ozark cooks up some of the finest BBQ in the South. To learn more about Ozark, please visit www.exploresouthernhistory.com/ozark.
Posted by Dale Cox at 6:26 PM