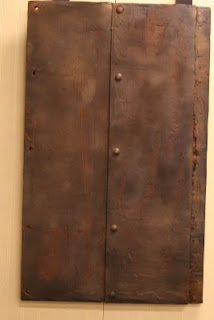 The Arkansas Inland Maritime Museum in Little Rock has announced a new exhibit on one of the most famous ironclads of the Civil War, the C.S.S. Arkansas. This photo shows a section of replica armor from the exhibit.
Built on the Yazoo River in Mississippi in remarkable time, the Arkansas was a makeshift ironclad plated with railroad track. Despite the conditions under which she was built, the lack of materials available to her builders, and the overall "ramshackle" nature of the project, she was one of the most successful ironclads launched by the Confederacy.
Here is the official press release from the museum:
Nearly 150 years ago, in the spring of 1862, a warship was being built in a makeshift shipyard in Yazoo City, Mississippi. Her armor, pieces of railroad track, had to be pulled out of the river where they had sunk. Unpainted, the rusted rails gave the vessel her only color.

This new ship fought not one, but three battles in a single day, one against an entire enemy fleet. Afterward, her captain would write, “We stood for them, fought them, ran by them at pistol-shot distance…and I think, did much injury…”

150 years ago, one ship thwarted the ambitions of not one, but two enemy fleets. One ship returned 400 miles of river to friendly control.

Learn about this one-of-a-kind vessel, built under the direst circumstances imaginable. Touch replicas of her armor, see her weaponry, and read about her short career by visiting the Arkansas Inland Maritime Museum (AIMM) and touring their new exhibit, “We Fought Them” – The Ironclad CSS Arkansas. This exhibit will also feature artwork loaned to the museum by artist Dan Dowdey and never before exhibited to the public.
AIMM is located just blocks from both Verizon Arena and Dickey-Stephens Park in downtown North Little Rock and short walk across the Junction Bridge from the Riverwalk in downtown Little Rock. The museum is open Wednesday through Sunday. For more information call the museum at 371-8320 or visit http://www.aimm.museum/.
Posted by Dale Cox at 3:51 PM