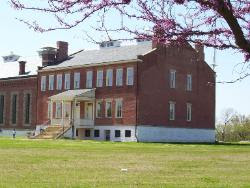 The Battle of Massard Prairie and the related attack on Fort Smith a few days later achieved remarkable results for small encounters.

In addition to killing or wounding around 40 Union soldiers, the Confederates also captured around 120 more. The Federal garrison at Fort Smith had been deprived of the equivalent of two full companies of trained and battle-hardened cavalry. At Massard Prairie, Gano's men also took away 200 Sharps rifles, 400 revolvers, horses, camp equipment and more. During the demonstration on Fort Smith four days later they captured another $200,000 worth of Union supplies, a herd of cattle, horses and more.

As impressive as these results were for small actions, they opened the door for something much more dramatic - the Cabin Creek raid.

General Thayer's monthly report conjectured that Cooper's goal had been "to hold this force here and also to make raids between here and (Fort) Gibson." He was more right than he knew. The attacks drove most of the Federals into the works of the Fort Smith and just two weeks later Gano and Watie struck north across the Arkansas River, wiped out a Union force protecting a hay-cutting party, and then drove north toward the supply road connecting Fort Gibson with the Federal posts in Kansas.

On September 19, 1864, they stunned a major Union supply train of 300 wagons and 1,800 horses and mules at Cabin Creek in the Cherokee Nation. Scattering and destroying what they couldn't carry away, the Confederates returned to headquarters with 130 wagons loaded with supplies and 740 mules. It was one of the greatest supply captures of the Civil War and resulted in the passage of commendations to Gano, Watie and their men by the Confederate Congress in Richmond.

Combined with the captures at Fort Smith, in just three weeks the Confederate forces had inflicted more than $2,000,000 in damage to the Union war effort in the West. By any measure, it was a dramatic accomplishment that began on July 27, 1864, with the Battle of Massard Prairie.