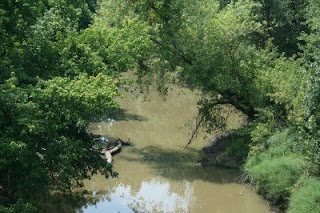 As their main line of battle began to collapse, the Confederates started to fall back to the bridge and adjacent fords over Elk Creek.
Heavy fighting took place on the north side of the Creek as the Confederates took advantage of high ground overlooking the bridge in an effort to slow the Union advance. The stand was briefly successful, but the Union attack was now irresistable and the hard-fighting Southern troops began to fall back toward the bridge.
As the Union forces pushed their way forward to the northern banks of the creek, General Cooper ordered his men to make a last ditch effort to defend the fords and bridge. The situation, however, was beyond his control. The Confederates continued to fight, "desperately contesting every foot of ground," but the Federal advance could not be stopped.
Our series will continue.
Posted by Dale Cox at 2:54 AM