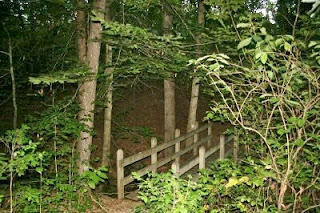 When the Confederate attacks broke the Union lines at Poison Spring, the battle quickly devolved into a bloody rout.
Pressed from three sides, the Federals began to fall back away from the coveted wagon train and tried to escape across a steep ravine and into swampy areas to the rear of the main battlefield.
The ravine proved impossible to cross with artillery, so the four Union field pieces were abandoned and fell into Confederate hands.
The 1st Kansas Colored Infantry had already sustained heavy casualties by this time of the fight, so it is difficult to determine how many of its men fell during the retreat phase of the battle. The subsequent reports of Union officers indicated that "half" of the regiment had been killed or wounded on the main battle line by Confederate artillery and musket fire.
When the regiment began its attempted retreat, it did so under heavy Confederate pursuit, particularly by the 1st and 2nd Choctaw and Chickasaw Regiments. These Native American soldiers were irate with the Union cause because of the suffering inflicted on their families by these same soldiers prior to the beginning of the Red River Campaign. Union treatment of Choctaw and Chickasaw families near Fort Smith had forced them to flee their homes by the hundreds and many now lived in refugee camps near the Texas border. The Choctaw and Chickasaw warriors struck back with a vengeance at Poison Spring.
According to Union and some Confederate reports, soldiers from the 1st Kansas Colored were killed as they fled from the scene of the fighting and much controversy about murders has swirled around the Battle of Poison Spring.
When our series continues, we will look closer at this phase of the battle and the evidence on murders at the battlefield. Until then, learn more about this fascinating and controversial fight by visiting www.exploresouthernhistory.com/poisonspring.
Posted by Dale Cox at 7:56 PM