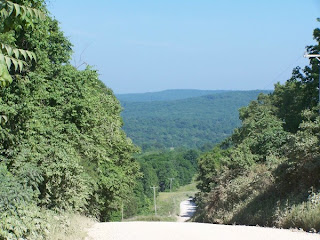 Continuing our look at the Boston Mountains of Arkansas, this view looks from a ridge across the valley of Cove Creek.
A major Civil War landmark, Cove Creek flows south through the Boston Mountains from the Ozark Plateau of Washington and Benton Counties into Crawford County on the Arkansas River. It merges with Lee Creek in northern Crawford County and flows into the Arkansas River at Van Buren.
The valley provided a natural route through the mountains for the movement of large bodies of troops. Confederate troops followed Cove Creek on numerous occasions, most notably during the days leading up to the Battle of Prairie Grove. Federal troops, in turn, used the valley to move south prior to the fights at Dripping Springs and Van Buren.
Posted by Dale Cox at 1:22 PM